Enderal:Dark Chambers of our Mind 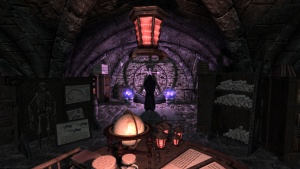 The Father, inviting you

This quest will begin automatically after Old Wounds. Go to sleep at any bed, and you'll find yourself in a strange dream, at what appears to be the the Rhalâta Temple. A robed man will talk to you, telling you to go back to the Rhalâta and tell the First Seer that "Dawn is coming".

You can choose to tell Tharaêl about your dream, in which case you'll find him at his Shed hideout. He will explain that what you experienced wasn't a real dream, but an illusion planted by The Father with Psionics while you were at the temple. At any rate, Tharaêl thanks you for telling him about it and confirms that you should meet with The Father.

Enter the Rhalâta Temple and talk to the First Seer, who will then direct you to Brother Sorrow. Brother Sorrow will direct you down the stairs, which seems to lead to a dead-end. However, as soon as you hit its bottom, the wall will dissolve, revealing an entrance to The Father's quarters. Inside, The Father will ask you to join his expedition, and then explain its purpose:

Dal'Galang, an old Grandmaster of The Holy Order, seems to have found a way to achieve transcendence and separate the soul from the body. The Lost Pages you recovered contain the ritual needed for this process, which can be achieved in the Room of Paintings of a temple once used by the Black Libra. Your job is to help defend the Rhalâim from the dangers inside of the temple, along with the other hired mercenaries. With that, The Father gives you the location of the old temple and asks you to meet him there.

If you completed Secrets, collected a Dreamflower during A Drop in the Ocean, and refused to let Yuslan Sha'Rim take it, you can use the Substance Decomposer in The Father's room to craft and drink a Dreamflower Elixir, unlocking a new ending.

The room where you split paths

The old temple is in the northern part of the Frostcliff Mountains. The closest teleportation/Myrad point is the Frostcliff Tavern, but you will still need to walk a long distance to arrive there. Make your way to the excavation site and you'll be directed to join the other hired mercenaries. They don't seem very open for conversation, with the exception of Zar'Ah, who pulls you away for a private chat. After exchanging personal stories and motivations, you'll have to wait for The Father's arrival. Go back to the mercenary area and interact with the campfire to wait.

The Father will teleport to a balcony and gather everyone for a speech on the mission. After that, he will teleport next to you and assign your team: You, Zar'Ah, and Tharaêl are to go in an hour after the two initial groups, accompanied by Sister Lust's group. Your group will form, and you will automatically wait until it is your turn to enter the ruin. Once your number is up, head to the temple entrance at the bottom of the excavation pit, where your team members and Sister Lust's group will follow you.

The path inside of the temple is linear until you hit a central room that splits into four. After you enter the room, the hallway you came from will blocked by a wall, so you will not be able to go back from here. A note on the ground indicates that the two initial groups went through the east and west. Sister Lust decides to go through the north passage, and so your group is left with the southern door.

Once inside, you'll find Jespar or Calia (depending on which you have the highest sympathy with), who will attack you. After a conversation, you'll realize that everyone in the group saw a different person of importance to them, revealing that the temple is using illusions. Head to the barrier atop the set of stairs to the northeast and Tharaêl will try to banish it, to no avail: You'll have to find a way of deactivating it somewhere else.

The heart consuming the sacrifice

Go to the room to the west and you'll find an inscription, which Tharaêl tries to read but fails. Go back up the stairs into the room to the northwest, past your mother and sister sitting on a bench, and you'll find an oversized and hostile Daddy. Dispose of your father and the beating heart at the end of the room will be revealed. Before you can discuss much, however, Tharaêl seems to hear Brother Hatred scream, and leaves you alone with Zar'Ah to see what happened. Talk to Zar'Ah and you'll be able to discuss Tharaêl's behavior and her motivations for being there, until an arrow pierces her neck.

A bright light coming from the ceiling consumes her body into the beating heart, opening the barrier that you inspected at the start. Tharaêl then reveals that he could read the inscription just fine, and that it said a sacrifice was necessary to move forward. The scream was just an excuse to catch Zar'Ah off guard. With that taken care of, head to the barrier that was just opened, and you'll end up at the heart of the temple.

Brother Hatred has arrived there before you, but Tharaêl kills him to make sure only you two can call The Father. Head to the Room of Paintings. Before you can enter it, the path ignites and a large magical abomination appears at the center of the room. This is an extremely dangerous and difficult monster, so be prepared for a tough fight. Once you have taken care of the abomination, Tharaêl will summon The Father and Brother Sorrow, then immediately close the portal so that they can't call for backup.

If you have a high distrust with the Rhalâta, The Father will have seen your betrayal coming, and attempts to sway Tharaêl, saying that you gave up his plans after the Dark Valley. If you have 40 or more Rhetoric, you can convince Tharaêl that the Father is lying, and the quest will continue as if you didn't have a high distrust. Otherwise, Tharaêl is successfully swayed and says that now he'll just have to kill you along with The Father.

Before anything can happen, however, The Father will reveal what truly happened in The Refuge. All of the children abducted were afflicted with the Foulness, which would have killed them before they became adults. The Father used them to conduct experiments on the human soul, transferring the souls of the children to a new simulacrum body that he built manually out of artificial materials. Most of the test subjects died, but three survived: Tharaêl, Nessiah (Sister Pride), and Letho, which The Father reveals to be the true identity of Brother Sorrow. However, those that survived were often afflicted with the Estrangement, caused by the soul rejecting the new body. Nessiah fled the Rhalâta because of this, and Letho's transfer failed partially, leaving him immune to the Estrangement but without a personality. Tharaêl, however, seemed to show no signs of the Estrangement and kept his personality as well as his memories, making him the "masterpiece" of The Father.

The Father then tries to convince Tharaêl that he is not the man Tharaêl thought he was, but before he can finish his sentence, Tharaêl decapitates the lobotomized Letho and attacks The Father. Here, you can choose who to aid by attacking either Tharaêl or the Father.

Siding with The Father

You'll find A Token of Goodwill and the Mask of the Father on the ground, next to a teleport scroll to the Undercity Barracks. Pick up the mask, and this quest will end. The token of goodwill will direct you to the Monastery Westgard on the Dark Valley, where you will find the Shadow of Transcience, a large armored wolf that you can ride as a mount.

Tharaêl jumping to his death

The Father is a formidable opponent, so be prepared for a tough fight. At times, he can teleport to the center of the room and spawn two shadowy copies of Tharaêl to attack you, forcing you to kill both before coming down to continue the fight. After you defeat him, large magical red swirls will come out of his body for a few seconds, and you will be unable to loot it. Tharaêl goes over to Letho's body to lament having to kill him, but before you can talk to him, The Father reappears and knocks you both unconscious. The transcendence then occurs as planned, with you watching from the ground, unable to move.

After you wake up, head towards the Room of Paintings, and you'll find that it has disappeared, leaving only a giant hole in the earth. Tharaêl sits on the edge of the hole, covered in blood, next to Brother Sorrow's body. Talk to him, and you'll find that he is broken: His plans failed, he killed the only person ever close to him, and he learned that he is a dead soul transferred to an artificial body. If you chose to spare Qalian during Qalian's Last Smile and have more than 40 sympathy with Tharaêl, you can talk him out of suicide, then convince him to go to the Frostcliff Tavern or your house in Ark, if you've bought one (if you have both houses, the one in the Nobles Quarter will be chosen). Tharaêl can be communicated with and has new dialog options. Even if you choose to turn on the Father and save Tharaêl, you can still get your payment from Rhalâta, provided your Rhetorics skills are good enough. Return to the Father's quarters. There you'll meet the First Seer. Pursuade him with Rhetorics, that the Father promised you a reward, and, if the persuasion was successful, the First Seer will give you some money. If you fail to save Tharaêl, he will give you the key to a chest in his shed and jump down into the hole. Inside the chest, you will find among other things, 620 gold, and a "Faded Folio". Reading this will grant you the hidden talent Unleashed Fury.