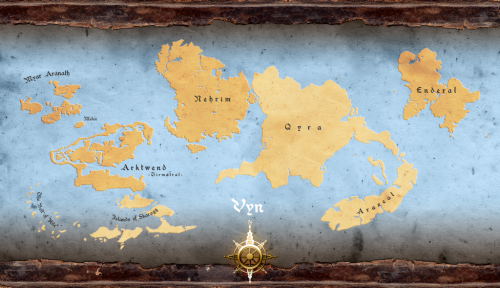 Map of the world of Vyn

Vyn (also known as Asgard and Seat of the Gods) is the planet on which all games are set. The following countries are currently known:

The Past Sea (also known as the Elapsed Sea)[1] encompasses the continents of Myar Aranath, Arktwend, the Skaragg Islands, and the Belt of Kilé. Only the archipelagos to the southwest are tropical; the other continents are harsh and grey, which is due to the magical contamination from the war in Myar Aranath.[2]

The Spice Channel is the narrow strait between Nehrim and Qyra. Much of the trade between the two countries passes through it.

There are many different historical narratives that vary from people to people.
The one documented below is the one on which the continents dominated by the Light-Born (the "Civilized World") have "agreed."

The Era Before the Cycle of Mankind (Before Starfall)

Location of Individual Countries of Vyn in the Grid